This February, we celebrate Ms. DaCosta and her contributions to LIG Global. Our mission wouldn't be possible without the dedication and compassion she brings to our team. 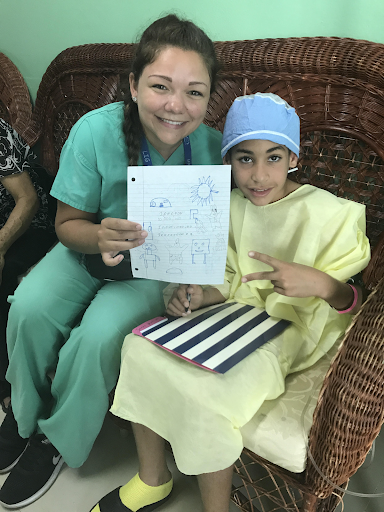 This February, we celebrate Ms. DaCosta and her contributions to LIG Global. Our mission wouldn't be possible without the dedication and compassion she brings to our team.

LIG Global has always prioritized education as a foundation for empowerment. This mantra is not limited to those that we help, but also is relevant to our amazing volunteers. Angela DaCosta is one of our talented volunteers that we’ve had the pleasure of working with and watching her grow into a promising healthcare professional.

Angela grew up in East Hanover, NJ, surrounded by the medical field; with her father being a gastroenterologist and her mother being a nurse, Angela’s love for medicine started at a very young age. Equally important to Angela is service to others who are less fortunate. Throughout the years, Angela and her sisters have given back to the community by partaking in fundraisers and projects aimed at those in need. Angela is now a 3rd year medical student at Rutgers New Jersey Medical School who has been able to channel her passion for medicine and service into a future career as a physician. Reflecting on her experiences with LIG, she emphasizes how participating in missions to Dajabon helped her pursue her passions in a unique way.

In 2016, during Angela’s sophomore year of college, Claudine Sylvester, the CEO of LIG Global and someone Angela considers to be a mentor and role model, invited her to join a medical mission to Dajabon, Dominican Republic. Angela recalls her nerves prior to this first mission; she worried that she would not be able to contribute to the team’s efforts in a meaningful way at her age.

“Of course, I was very wrong about that,” Angela states, “I quickly learned that every member that attends the missions, both young and old, plays a critical role in the team achieving its goals. I felt at home. The environment that LIG creates when attending missions, especially your first one, is one where strong bonds and relationships form quickly.”

Having had such a meaningful experience on her first mission, Angela has since participated in three additional missions to Dajabon, explaining that, while the missions were all to the same location, she had distinct yet equally worthwhile experiences. A memory that stands out in particular from her missions is one about a family in Dajabon whose child needed surgery. After the talented physicians on LIG Global’s team completed the surgery for the boy, Angela made it her goal to distract the boy from his fears of being in an overwhelming medical setting by playing games with him and keeping him laughing. To express their gratitude for Angela’s compassion, the family purchased her two individually wrapped pieces of mint gum from a local store. To this day, Angela keeps the pieces of gum on her dresser as a reminder to always treat her patients with compassion because sometimes even the smallest actions have the biggest impacts on an individual.

By volunteering with LIG Global, Angela feels that she has been able to break out of her comfort zone in a unique manner while also forming valuable relationships with mentors, fellow volunteers, and the patients the team has helped. We thank Angela for her compassion and grace as she has helped LIG Global care for individuals across the world and cannot wait to see all that she accomplishes in the future!